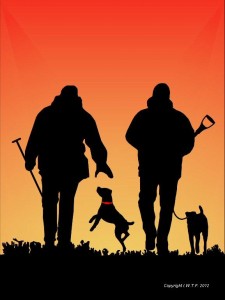 As terriermen, much is revealed about us by the tools we choose to carry into the field, the strategies we employ to bring quarry to account, the ethics we embrace or ignore in seeking success, how we define terrierwork and how we talk about it.

Traditional terriermen remain abundant, if far less visible, quiet, decent, natural hunters who play a proper, exacting and essential role in the scheme of things.Above all the true terriermans’ thoughts and actions are tempered by respect for the quarry, through calm self restraint, even when no one is there watching us.

For people learning about working terriers for the first time, do not be surprised to find yourself having to rethink, what you “thought you knew” about terrierwork. Not all hunting is the same, not all terriermen are the same. To brand terrierwork as good or bad, black or white with no room for grey is a classic oversimplification.

The Anti-hunting and Animal welfare groups have tried to portray terriermen as a particular stereotype for a long time now without great success and it has had no impact on our work. Let us address these groups’ motivations first and then having addressed them, put them aside.

It is important to understand where these animal welfare groups originated and what drives them. In the later part of the eighteenth century, the most radical protests against the perceived abuse of all animals were generated in comparative isolation from the world of animal keeping and husbandry. Many of the leaders against cruelty to animals were townspeople and members of middle class professions removed from the close association with animals other than pet keeping, not too different from the situation today.

The agitation against cruelty did not come from butchers or colliers or farmers, directly involved in working with animals, nor amongst grooms, cab drivers and other servants who spent their days in close proximity to their animal charges. An assortment of well-to-do townspeople, educated country clergymen and members of the professional middle classes seeking to distance themselves from the “warlike traditions of the aristocracy” emerged as the leaders of the movement, and often directed their efforts at reprimanding and regulating the lower classes. They were clever enough politically to pick the “low hanging fruit”. Small sections of the rural or hunting community and target them alone, a case of divide and conquer.

Their early success gave them a model to work with. From then on they have adopted a slicing off of each successive portion of the target community. As long as the other larger hunting groups would allow the outside smaller layer to be separated and picked off, these welfare groups would thrive.

This was the first instance in hunting terms, where the fervent belief of a “better moral compass” of one group, was attempting to chastise and control the “right to choose” of another group. As we were to learn later, the welfare of the animals was not a real concern for these groups, they derived their motivation from correcting the “lower classes” and by so doing converting everyone to their beliefs. Their aim was to save your soul.

Whether they actually lived all their lives in cities or not, these people valued urbanity, despised as barbaric the livestock handling and rural sports of country people, whether aristocracy, gentry or the labouring poor. They were what we now call urban identified. Indeed urbanity might be said to be measurable in terms of the distance from the world of agricultural production and live stock rearing, of hunting, butchering, meat production and the countryside in general.

A Countryside Rich in Wildlife

Of course for these urbanites, the countryside still looks attractive, especially when viewed at a distance, from a passing car or railway carriage window. Paradoxically the gentle undulations of much of the landscape give it an aesthetic appeal even when stripped of its trees, hedgerows and wildlife. It is the appeal of form, the appeal of the dead landscape in an art gallery. It may please their intellect but it cannot enlighten them with the full sensual pleasure of a countryside rich in wildlife, a tangled vibrant, untidy countryside filled with the noise, smells, colours, sheer exuberance of life, something which they secretly shun.

How to describe in words what it feels like to hunt and work in this countryside is nearly impossible. It is a world that you must immerse yourself in with no pre conceived ideas or conditions.

Their personal profile has not changed that much in over 100 years, in fact if anything they have become more defined by the splinter groups they themselves identify with. From a hunters perspective there are three main branches, from the unhinged to the concerned.

These groups tend to network in an attempt to raise their profile numbers but are not as cohesive in their beliefs as they would first appear. The first two groups are transparent in what drives them and the public has little time for their arguments. They tend to hide behind the third group as a means to an end. They use the Animal welfare groups concern for animal quality of life issues to spread their own doctrine of “utopia” on the part of the vegans and “hatred” on the part of the Anti-Hunting lobby.

It is essential for hunting organisations to have debates with animal welfare groups’, many of their members are well meaning and should not be stereotyped any more than hunters should be. Animal Welfare conferences and other forums help establish a conversation where common core principles can be discussed. What we have in common rather than highlighting our differences.

Some of these animal welfare groups’ actions in the past, targeting people with abusive emails, threats, and media sensationalism, have only bred hatred amongst their members. This negative posture has attracted new leaders in their ranks, leaders who care less about the welfare of animals and the environment than they do their own power. Leaders who push the Donate button of a generous public through cynical advertising campaigns, but are shy to tell the public the scale of their own salaries. Hypocritical as these leaders of nearly all the animal welfare groups portray a charitable status and continuously have their hand out for Government subsistence while also critising the same departments.

This new animal welfare group leadership have concentrated their actions through a combination of three allies in their conversion process;

The damage this small vocal group “a perfect storm for the hunting community” can cause is out of proportion to its’ actual size. Some reporters have a predefined bias against hunting and we need to debate the hunter bashing position these reporters assume as the ANTI groups’ use the journalists’ professional weakness to their advantage.

As we expose these leaders for what they are and show the public what the rural hunting community in partnership with the farming industry achieves by managing the countryside where wildlife thrive, we need to pool our collective resources and draw on the knowledge and expertise within our own ranks.

We need to make contact with the well meaning people in these animal Welfare orgainsations, the people at the coal face of animal rescue and control and by-pass the leaders who have been affected by their own propaganda.

Adapt our campaign as we have repeatedly adapted our hunting techniques. This way we do not waste time on this single subject Even if anti-hunting sentiments were to decrease, hunting as we know it could still be in trouble. The reduction in animal habitats due to urbanisation contributes to the problem, generally due to human population growth, but more importantly due to the relentless intensification of farming methods, the drive for efficiencies and cost reduction in farm products for a growing world population. At this intersection of countryside and urban sprawl and as hedgerows and small woods are cleared in an attempt to produce more, the animals that once lived there are under pressure to move and adapt.

The fox, rabbit, mink and rat to name a few will become more of a pest that the public will have to deal with in their own back yards.

In any exploration of hunting, there is one category of animals that is usually not mentioned from the public’s perspective, the control of those creatures classified as pests or vermin. Pest/vermin is a rather indeterminate classification, and what animals are considered in this way will be differently configured in different cultures at different times. What they all share, however, is that humans regard them as transgressive animals and often, more strongly, as enemies that provoke emotional reactions ranging from annoyance or anger to repulsion and disgust. These are animals which are intrusive into human spaces and human concerns, invading cities and towns, homes and other buildings (whether urban or rural), gardens and the fields of human cultivation where they disturb the local cultural order. Humans have a conflictive relationship with pests and vermin because they are either (and sometimes both) destructive or regarded as polluting. They are destructive when they kill and eat domestic livestock or eat crops, and they are polluting when they are simply present in places where humans think they ought not to be, for example food stores.

The control of vermin and pests is usually expressed in terms of destruction, removal, eradication, exterminaion, annihilation or cleansing. In their assault on these animals, humans make use of a variaty of weapons, traps, poisons, and other chemicals, and they may even use other animals for this purpose, for example, cats which are kept on farms to kill mice and rats. People who suffer such intrusions may attempt to kill these animals themselves. For example farmers might themselves set traps, put out poison, (both no longer available to the farmer in Ireland) or shoot animals that are causing them a problem (They can legally shoot dogs worrying their livestock).

At a domestic level, gardeners put out poison to kill slugs and other creatures which eat their plants, and people who have evidence of mice in their houses may try to catch or poison them. Here the person does not, generally have to have specialist skills in order to kill these and other animals, but they might not have the appropiate means or the necessary knowledge and experience for going about it, and they might even find the process disagreeable.

In these cases, they will hand over the responsibility to others, there is a considerable industry in which professionals are paid to kill vermin and pests. Unlike the domestic killings in the food industry in which animals are brought into specailist places of slaughter, here the professionals must move to the spaces in which the animals are found and attempt to control them there, they must be removed from those spaces. This process usually begins with a search for the problem animals, or at least a search for the signs of their presence, before the means for control can be put into place in ways that minimize any attempt by the animal to evade them.

These are situations of disorder in which humans attempt to reimpose an order of their choosing. In terms of the motivations and emotions (annoyance, anger, repulsion, loathing, disgust) of the people who have suffered such invasions, it is possible to consider this removal as welcome.

The means of control should be efficient and effective, but it is the actual death, in and of itself, of the animal that is wished for or desired, and there is relief and satifaction when it is accomplished. It is in this area where the terrierman has always provided a local service to farmers and increasingly in the Urban environment his attendance signifies the protection of livestock or foodstuffs.

It is here that society understands the requirement for terriers and as they are better informed of our code of conduct and how we undertake this work, they will become aware of the continued need for terrierwork in the future.