This book was based primarily on Gaston III, Count of Foix, (also known as Gaston Phoebus) Livre de chasse, which was originally composed in 1387. The Master of Game was written by Edward of Norwich, 2nd Duke of York, between 1406 and 1413 mostly while being held prisoner for having treasonous designs against his cousin, Henry IV. The majority of the book is almost an exact translation of Livre de chasse, he added five chapters of his own detailing hunting and coursing in England.

This is widely regarded to be the oldest English language book on hunting. 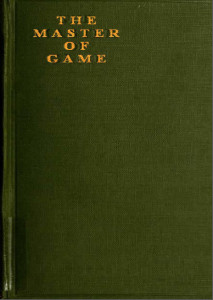 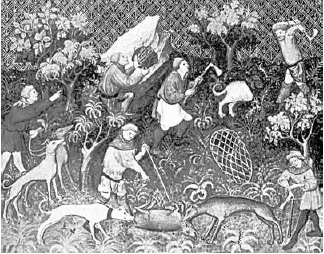 The image is from a wood engraving from the era (circa 1400) included with the 1909 publication. It shows terriers going to ground and nets placed at an entrance. Hunters use mattocks to dig down where the game is drawn and dispatched.

The hunting for a fox is fair for the good cry of the hounds that follow him so nigh and with so good a will. Always they scent of him, for he flies through the thick wood and also he stinketh evermore. And he will scarcely leave a covert when he is therein, he taketh not to the plain (open) country for he trusteth not in his running neither in his defence, for he is too feeble, and if he does, it is because he is (forced to) by the strength of men and hounds. And he will always hold to covert, and if he can only find a briar to cover himself with, he will cover himself with that. When he sees that he cannot last, then he goeth to earth the nearest he can find which he knoweth well and then men may dig him out and take him, if it is easy digging, but not among the rocks.

This eBook is for the use of anyone anywhere at no cost and with almost no restrictions whatsoever. You may copy it, give it away or re-use it under the terms of the Project Gutenberg License included with this eBook or online at www.gutenberg.org

Below are the introduction to the 1909 book by the editors, Theodore Roosevelt and the complete book in pdf format.

Introduction by the editors 1909